Apart from music, I have two great passions: food and languages.

My interest in food was first awakened on visits to family friends in Belgium. I particularly remember a meal in a Brussels restaurant called Het Oude Pannenhuis, where I had pintadeau à la fine champagne – guinea fowl in a cream and brandy sauce. For years I tried to recreate the magical taste of that sauce, with varying degrees of success. I think what made it special and hard to reproduce, was that it would have been made with a proper veal-bone stock, lovingly reduced for hours to a demie-glace…something which is almost impossible to imitate at home.

I first started cooking myself as a student in London. After an unhappy fortnight preparing instant meals such as Vesta curry, I decided to make real food, and my first mentor was an excellent little book called Cooking in a Bedsitter by Katherine Whitehorn. Having discovered French food as a teenager, I found a new inspiration in London in Greek Cypriot food, which I discovered in the many small and friendly tavernas in Camden and elsewhere in North London. Kleftikon – lamb on the bone, slowly braised with wine and garlic, is still one of my favourite dishes.

Soon, I wanted to try every possible culinary challenge. I bought whole pigeons in street markets, and plucked and gutted them. I made tripes à la mode de Caën with fresh tripe and calves’ feet, I made quenelles de brochet with whole fresh pike and learned to deal with live crab and lobsters. I think I spent more time cooking than studying music.

When I went to live in Switzerland, I absorbed the local food, but to some extent reacted against it. Being so far from the sea, I became obsessed with seafood. Fortunately the Swiss have a deep love of all kinds of food, and the cosmopolitan population, especially the Spanish immigrants, ensured a ready supply of fresh seafood which was actually greatly superior to what was available in Scotland at that time.

In 1988 I won a cooking competition with a recipe for crab ravioli: 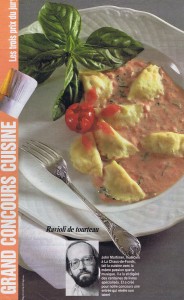 Having left my teaching job in the Conservatoire in 1994, I was tempted by an offer to cook for tourists in a beautiful villa in Tuscany where I stayed for 6 months. 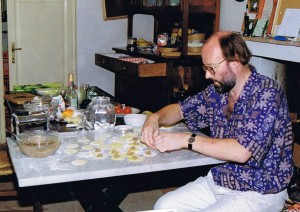 The culmination of my cooking ambition was when I moved back to Scotland in 1997, Rather disillusioned with music for a while, I decided to open a seafood restaurant! 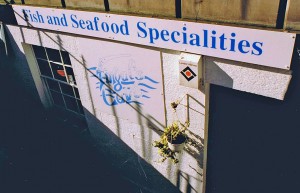 I didn’t manage to make any money in this venture, and soon went back to music. This doesn’t stop me cooking seafood at home. 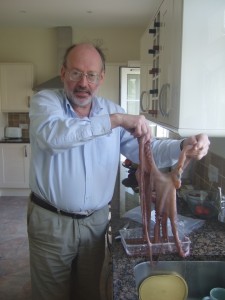 A fairly recent portrait…can’t remember what the creature on the left is though.